SHAAP and AFS respond to the Scotsman story on MUP

In response to a recent article published by The Scotsman, SHAAP and Alcohol Focus Scotland respond with a letter to the Editor.

On 15 November, Public Health Scotland (PHS) published a report which evaluates the price and range of alcohol products in the Scottish off-trade sector in the 12 months following the implementation of Minimum Unit Pricing of alcohol (MUP).

"This study found that, in the first year of MUP in Scotland, the average price of alcoholic drink products increased at a greater rate than in England & Wales or between the two prior years in Scotland. Products that saw greater increases in price also tended to see greater reductions in overall sales, as well as reductions or smaller increases in sales value. There were also reductions in larger container sizes and larger multipacks, not just limited to brands that saw higher price increases, but there were also increases in the amounts sold in smaller multipacks that appeared to compensate. There was limited evidence of an effect of MUP on the introduction of new products, the discontinuation of existing products, or for changes to alcohol by volume (ABV)."

Source: Evaluating the impact of MUP on alcohol products and prices (publichealthscotland.scot) (P.133)

Following the release of the report, the Scotsman published a story suggesting that minimum unit price (MUP) should be abandoned because of an increase of fortified wines such as Buckfast. Dr Alastair MacGilchrist, SHAAP Chair, and Alison Douglas, Chief Executive of Alcohol Focus Scotland respond to the article with a letter to the Editor: 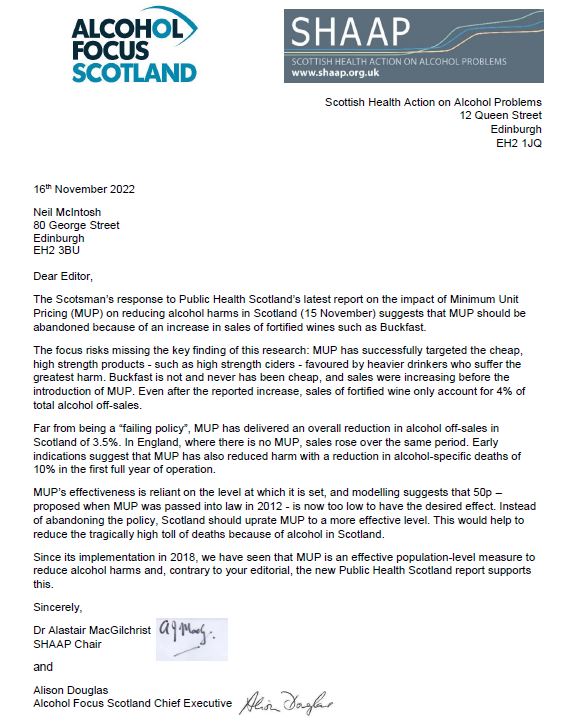