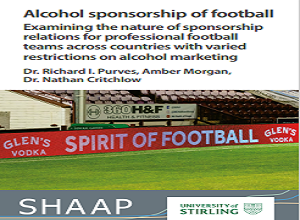 Ahead of the Scottish Government consulting on plans to restrict alcohol marketing, calls for a ban on alcohol sponsorship of sports are being made, as it is revealed that Scotland has a higher proportion of alcohol industry sponsors in comparison to football leagues in European countries with stricter alcohol marketing restrictions.

A new study, launched today, reveals that the Scottish Premiership has a higher proportion of alcohol industry sponsors compared to most of the other European nations studied. The report, commissioned by alcohol expert body Scottish Health Action on Alcohol Problems (SHAAP) and carried out by the University of Stirling’s Institute for Social Marketing and Health, assesses the extent of alcohol sponsorship in the top tier of men’s professional football across 10 European nations. The study assessed to what extent different levels of restriction of alcohol marketing impacts on the sponsorship arrangements of football clubs in these countries.

Sponsorship is a key strategy used by transnational alcohol companies to increase awareness of their products and reach new audiences in different parts of the world, according to the World Health Organization (WHO). Controls on alcohol marketing, including sponsorship, are listed by the WHO as one of their three ‘best buy’ policies to reduce the harmful use of alcohol.

It is well established that exposure to alcohol marketing is causally associated with the initiation of drinking, an increase in alcohol consumption including binge drinking, and has been reported to increase risk of relapse for people in recovery. Sport sponsorship provides alcohol companies with a prominent and highly attractive method of reaching a large audience, influencing how much and how often they consume alcohol by capitalising on their emotional connection to sport. However, currently alcohol marketing and sport sponsorship is self-regulated in the UK and Scotland, giving industry control of what we see on pitches, shirts and TV.

Today’s new research reveals that in comparison to ten other European leagues, Scotland had the second highest proportion of alcohol industry sponsors after Belgium, at 6.4% in Scotland compared to 2.6% across all the countries studied. Moreover, of the 12 Scottish Premiership football teams, 6 have at least one alcohol industry main sponsor or partner. Countries with statutory restrictions on alcohol marketing and sponsorship have comparatively less alcohol sponsorship in their top flight football clubs. This is the reason behind SHAAP launching the Calling Time on alcohol sports sponsorship campaign today.

“Doctors and the entire healthcare team see the impact of alcohol on people’s health, day in, day out. This is not surprising given how present alcohol products and alcohol marketing are in our everyday lives and the fact that the alcohol industry is allowed to sponsor our sports teams and events – which should be about health, participation and community. That is why we are being joined by others in our call to the Scottish Government to ban alcohol sponsorship in sports.”

“There is something very special and unique about the dedication of Scottish football fans and our emotional connection to our clubs and the game. And this commitment is being capitalised on by the alcohol industry who use sponsorship to increase sales of their products to fans. This research shows that Scottish Premiership clubs have a comparatively lower number of sponsors that our European counterparts, and within this we have a higher proportion of alcohol sponsors. We must find a better way to finance Scottish football, finding sponsors with values that align with sports and community and that’s why I support today’s call for a ban on alcohol sponsorship of sports.”

Tom Bennett, who has lived experience and is Rights and Recovery Officer for Scottish Recovery Consortium said:

“People whose lives have been affected by alcohol, and the public more broadly, want to see Scottish Government do the right thing and put sensible measures in place that respond to the current crisis and restrict alcohol marketing and sponsorship. Self-regulation, demonstrably, isn’t working.

“Sponsorship is triggering and makes us drink – it’s extremely effective – that’s why the industry invest so much money in it. Sports sponsorship sends completely the wrong message, especially to our children, that healthy activity is associated with alcohol. It’s completely unacceptable that people are bombarded with alcohol sponsorship when attending their favourite sports events.”

“Scottish Women’s Football takes the wellbeing of our players at all ages very seriously, as well as the importance of visibility and role models in building our sport. That’s why for a number of years now we have taken a policy of not taking sponsorship from alcohol or gambling products.

“Not only does this reflect our responsibilities for the health and wellbeing of all participants in the sport, it also acknowledges the links that physical activity has with good health outcomes including reduced risk of disease and improved mental health. It is widely acknowledged that alcohol has negative impact on both.”

“Now is the time for the Scottish Government, as it considers options for restricting alcohol marketing, to break the bond between alcohol and sport by banning alcohol sponsorship of sport in order to protect the health of people in Scotland.”