On Monday 17 October 2022, the newly appointed Chancellor Jeremy Hunt, announced a reversal of almost all of the tax measures set out in the Growth Plan that have not been legislated for in parliament.

In response to this decision, SHAAP Chair Dr Alastair MacGilchrist issued a statement on behalf of the organisation:

“SHAAP welcome the Chancellor’s decision to no longer go ahead with a freeze on alcohol duty rates.

Evidence indicates that previous similar freezes have increased the affordability of alcohol and have resulted in increased alcohol-related harms. The University of Sheffield has estimated that cuts and freezes to alcohol duty from 2012-2019 have led to over 250 additional deaths and 4,500 hospital admissions in Scotland and almost 2,000 additional deaths and over 61,000 hospital admissions in England.

Alcohol harm is currently one of Scotland’s most pervasive public health issues, evidenced by the latest alcohol death figures from the National Records for Scotland (NRS). The figures show an increase from 1,020 alcohol-specific deaths in 2020 to 1,245 in 2021. Additionally, in 2020/21, there were 35,124 alcohol-related hospital stays in Scotland (at a rate of 641 per 100,000). The decision not to freeze alcohol duty rates will result in the avoidance of a significant further increase in these alcohol-related harms and, by reducing these harms, will alleviate pressures on our over-stretched health service.

The World Health Organization has identified alcohol duty as being one of the most effective ways of tackling alcohol-related harm. We are hopeful that the UK government includes public health implications as a key outcome to be assessed in any decision-making processes around further duty changes.” 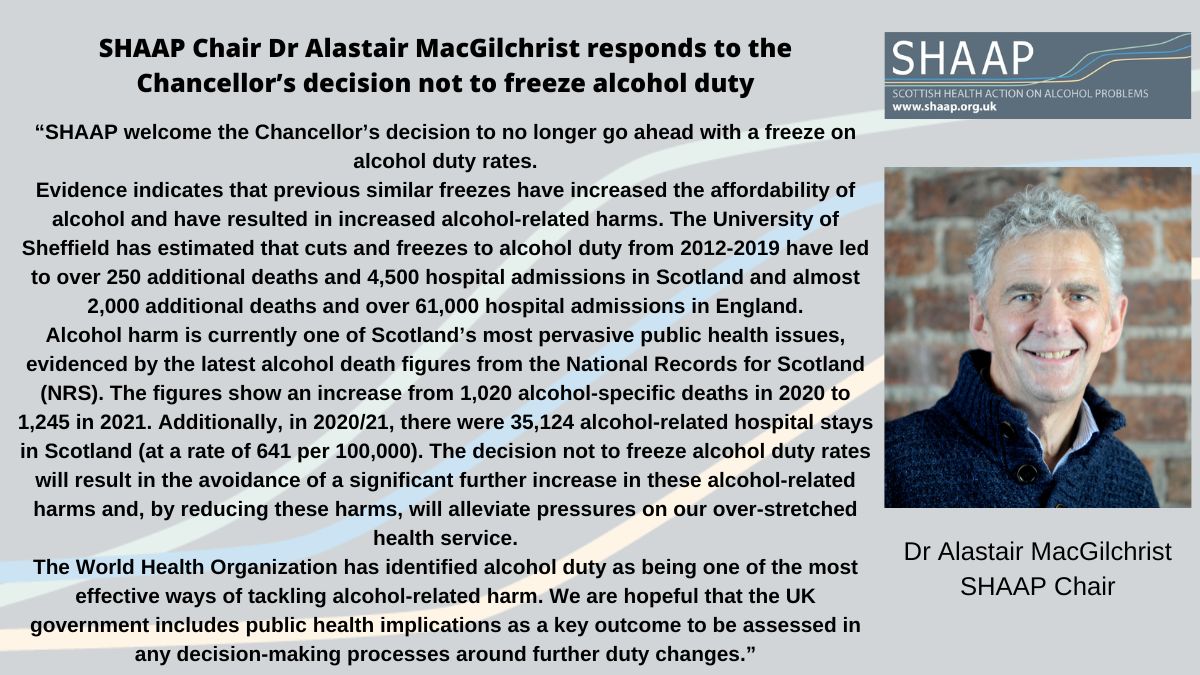