Stigma is a six-letter word 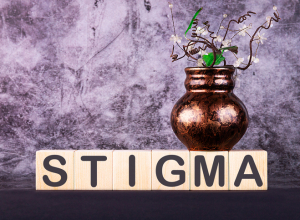 In this blog post, Michaela reflects on her own lived experience of addiction and the need to understand stigma as more than just language.

Stigma is a six-letter word, and like its shorter four-letter linguistic cousins it is also a dirty word – and numerous other dirty words, behaviours and actions are encompassed in its scope. Such a small word in the grand scheme of things – but such a big impact on so many people.

Stigma is also a buzzword – one of those go-to words wheeled out in cycles when we are forced to face the reality of the damage that people experience when they are desperate yet met with hostility and scorn. Things happen, we talk a lot, but it is still there – insidious – and so it is not long before we go through yet another round of actions to tackle it.

The danger of this is that the term stigma itself starts to lose its real meaning, the word becomes divorced from its impact, ennui sets in and professionals see tackling stigma as yet another training hoop – like health and safety – that has to be jumped through in order to get on with the real business of doing their job.

I mention professionals here, because despite some of the more rabid media and less enlightened general public, stigma is most keenly experienced within the very services that people call on to support them in their time of greatest need. It could be that self-stigma makes those of us with Lived Experience more sensitive, more aware of the actions of others, and more ready to look for the negative, or absorb the smallest slight and add them to our burden of guilt and shame. Or it could be that those who we need to have a deeper understanding of their central role in confirming or of disconfirming stigmatising beliefs just don’t get it. Or it could be a bit of both. But the point is that we need to create environments that don’t merely aim not to stigmatise; we need to build spaces that honour and celebrate individuals, families and communities that are trying to get their lives back on track.

So yes, stigma is a six-letter word. And our response often seems to be to tackle it with other words. We tie ourselves in lexical knots, debating which term, descriptor, and word order will enable us to talk about what we need to talk about without doing anyone down. While this is both logical and laudable in many ways it often has the opposite effect. I have lost count of the number of times people have admitted worrying endlessly about whether they are using the right language, preferring not to speak rather than say the wrong thing. While words are important they are not the problem in themselves; saying the right thing doesn’t mean you feel the right thing. And that’s the crux really – the right words divorced from compassion, genuine understanding and empathy – are worse than the wrong ones.
And this brings me to some of the concerns that people with Lived Experience have about some of the recent debates around the ‘right’ language. And I really want to mention it here because, even though it might raise some hackles, it is really important. And because people have asked me to. And because it highlights for me both the law of unintended consequences and the primary importance of engaging people with Lived Experience in all and any stigma activity from the outset.

Firstly, I think we need to understand that addiction and addiction recovery are a culture. And like any cultural group we have our own language. Words that may mean one thing in the wider world mean something completely different within our culture. We routinely describe ourselves as addicts (and other less ‘flattering’ terms) because we own those things, understand them and have faced head-on what they mean and what we need to do to stay as well as we possibly can. Just like other cultures and sub-cultures we are re-appropriating terminology, making it ours, and making it something new. So for it to be inferred, with the best intentions, that we should not describe ourselves in certain ways can often have the opposite effect to what is seeking to be achieved – the unintended consequences I mentioned. And equally, some of the words that are seen as the approved ‘lingua franca’ we find more stigmatising than the words we use ourselves.

We are not suggesting that words don’t matter or that words that have a meaning within one culture can just be used by other cultures. The standard, but good example, here is words used by people of colour that I would not use myself as I am not part of that culture. However, we should all think very carefully about how we debate stigmatising language – in case we inadvertently create more stigma by making people feel they are not part of the discourse or that their language is ‘wrong’.

So, what does this all mean? I guess the suggestion is that we need to move on from getting stuck in words and think bigger. Yes, stigma is a six-letter word but it really only describes something, a different word could be used to describe the same thing. The real problem relates to attitudes and behaviours, and no matter how much we tinker with language we are not really tackling these head-on.

My own experience of stigma has rarely related to what people have said or how they have described me. They have related to being made to wait well beyond appointment times without any explanation, to being ignored by receptionists, to having to repeat my story over and over again, to being told I had made myself intentionally homeless because I was an alcoholic, to being forced to hide I had a problem in the first place, to having to fight when I finally admitted that problem to get even the bare minimum of help and support, to being told over and over again that my health issue was self-inflicted and therefore I was not worthy of the same treatment as anyone else, to losing my home, job and almost my life because nobody seemed to care.