Manifesto for the 2021 Scottish Parliament Election

This manifesto calls on all parties and candidates to recognise that alcohol-related harm has implications for multiple other areas of physical and mental health, and to commit to policies that will help tackle Scotland’s alcohol problem. Doing so will not only ensure that fewer people die each year because of alcohol, but will also strengthen the long-term resilience and responsiveness of our NHS and care services, and provide the foundation for a strong wellbeing economy in the future. 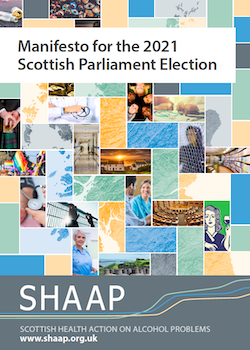 Scotland is an international leader in advancing evidence-based alcohol policies that protect people’s health. Yet, despite the commitments and achievements of the 2009 and 2018 Alcohol Frameworks, levels of alcohol harm in Scotland remain high. The COVID-19 pandemic has transformed life in Scotland since March 2020. For alcohol, the pandemic has accelerated the long-standing trend towards home drinking, which involves additional potential risks. So far, research indicates that the heavier drinkers have increased their consumption.

In 2019, 1,020 people in Scotland died from a cause wholly attributable to alcohol (REF) - a number that does not include deaths where alcohol has contributed, such as suicide, road accidents and a wide range of diseases. In 2015 alone, it was estimated that 3,705 deaths were attributable to alcohol (REF), with more than one in four of those (28%) due to cancer (REF). These statistics, while stark, do not begin to capture the devastating impact that alcohol can have on individuals, families and communities. There are also real inequalities to alcohol-related harm in Scotland. Although more people living in affluent areas drink more than is recommended than people living in the most deprived areas, it is the latter who are more likely to come to harm from alcohol. In 2018 you were 7 times more likely to end up in hospital and 4.5 times more likely to die because of alcohol if you live in one of the 10% most deprived areas, compared to the least (REF).

All deaths from alcohol are preventable, and it has been clear for some time what actions need to be taken to reduce them, as well as the health and social harms that alcohol causes in Scotland. In 2018, WHO launched the SAFER initiative – a comprehensive policy action package with five priority ‘best buy’ approaches known to reduce the harmful use of alcohol. These are:

In Scotland we have a clear framework for tackling alcohol harm that draws on many of the policies embedded in these approaches. However, the reality is that we have not yet gone far enough in implementing them.

Reducing alcohol-related harm in Scotland requires maintaining a focus on alcohol as a priority, as well as understanding the significance of alcohol to other areas of health and social policy. SHAAP recognises that we currently face unprecedented challenges to public health in Scotland, and immense pressures on public finances. However, as we approach the Scottish parliament election of 2021, it is more important than ever that we do not lose sight of long-term public health measures that can improve the health and wellbeing of everyone in Scotland, build the resilience of our NHS and local care services, and benefit the economy. At last estimate, problematic use of alcohol cost the Scottish economy £3.56 billion per year (REF). Now is the time for bold action on alcohol problems if we are to achieve our long-term public health goals and create a healthier Scotland for the future.

What we are asking

We are asking all parties and candidates to commit to four focus areas in which we need to push harder and go further if we are truly to tackle Scotland’s alcohol problem, achieve our long-term public health goals, and create a healthier Scotland for the future. Within these four areas, we identify key policies that need to be implemented immediately to reduce alcohol-related harm. For those policies that have not already been considered for adoption by the Scottish Government, a serious conversation about doing so needs to begin now. These commitments are more important than ever in the context of COVID-19, given the potential for growing health inequalities.

Investing in and improving treatment and support services