To reduce the consumption of alcohol, particularly among hazardous and harmful drinkers, leading to reduction in alcohol-related harm.

SHAAP was the first organisation to call for MUP, when we published the report, ‘Price, Policy and Public Health’ in 2007.

What does MUP do?

MUP sets a minimum price of 50p per unit of alcohol below which no alcohol in Scotland may be sold.

Why is MUP needed?

A series of studies by Stockwell et al in British Columbia between 2002-2009, when there were three increases in minimum prices for beer & four for spirits, found that, in the first year,  a 10% increase in average minimum price was associated with a 9% reduction alcohol-related hospital admissions and a 32% reduction in wholly alcohol related deaths.

MUP was implemented in Scotland on 1st May 2018. Over the following five years, its effects will be evaluated by a process being managed by NHS Health Scotland to assess impacts on:

The findings from the evaluation will be considered by the Scottish Parliament after 5 years; the legislation contains a ‘sunset clause’, meaning MUP can be discontinued if it is felt the results are not positive; if they are, another vote will be required to continue minimum unit pricing thereafter.

Scope and timeline of the evaluation by NHS Health Scotland can be viewed here.

MUP one year on

Data on alcohol sales is recorded by calendar year, so the 1st year report also includes the four months of January to April before MUP took effect on 1st May 2018. And whilst the data on alcohol sales appear to show a broadly positive trend, It should be noted that the MESAS report does not look at data on harm caused by drinking, which is only available for 2017 before MUP was introduced.

In August 2019, NHS Health Scotland published its report on compliance with MUP.

This found that compliance in licensed premises had generally been high and the transition to minimum unit pricing had been implemented smoothly, while police and licensing authority officials reported no significant increase in illegal and unlicensed activity.

Impacts on the alcoholic drinks industry

Read the report from Frontier Economics published by NHS Health Scotland in October 2019.

For the most up-to-date evaluation news and reports on MUP, visit: http://www.healthscotland.scot/health-topics/alcohol/evaluation-of-minimum-unit-pricing-mup

Read more about the Scottish and international campaign to achieve Minimum Unit Pricing in our Research & Policy Briefing No. 14/May 2018 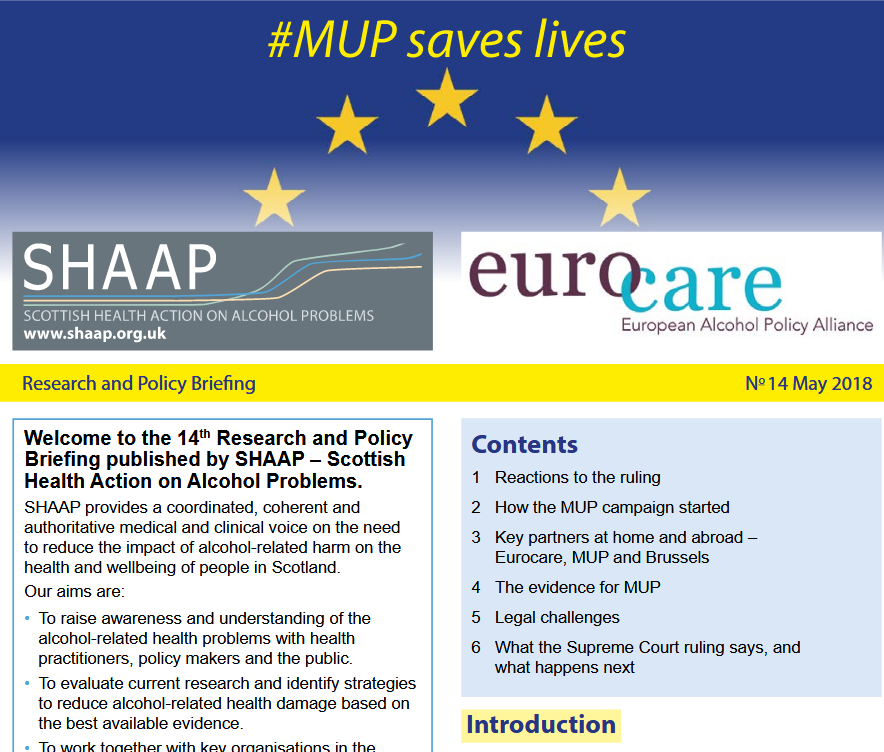