Care and treatment for people with alcohol-related brain damage: a matter of human rights

Alcohol-related brain damage (ARBD) is a condition caused by prolonged, chronic alcohol use. It can impact many, if not all, aspects of a person’s life. In this blog post, Julie Paterson and Dr Lisa Schölin discuss findings from a recent report by the Mental Welfare Commission for Scotland – a statutory organisation which protects and promotes the human rights of people with mental illness, learning disability, dementia and related conditions. The report looked at rights and treatment of people with ARBD in Scotland as part of the Commission’s task of visiting people subject to welfare guardianship orders to make sure their rights are respected.

Both heavy episodic drinking and/or chronic heavy drinking can cause damage to the brain. Some conditions are potentially reversible, while others are not, which makes early identification and beginning effective treatment important. For those living with ARBD, cognitive function and memory are affected and this makes many parts of life challenging – especially for those who continue to drink without understanding the consequences and further harm it causes.

Prevalence of ARBD in the general population is uncertain. Small studies from Scotland have indicated a prevalence of 0.07% in the former health board area of Argyle and Clyde, and 0.14% in Inverclyde, while a large autopsy study in American and European populations found Wernicke-Korsakoff’s Syndrome (one form of alcohol-related brain damage) in around 1.5% of autopsies. The most recent alcohol-related hospital statistics for Scotland showed a hospital stay rate for ARBD of 19.2 per 100,000 with much higher rates in general acute hospitals (16.3 per 100,000) than in psychiatric hospitals (2.9 per 100,000). The rate in general acute hospitals has increased since the late 1990s while in psychiatric hospitals there has been a downward trend.

Among people with alcohol dependence, it is estimated that up to one in three have ARBD. Research on homeless individuals living in hostels in Glasgow, where hazardous drinking is highly prevalent, showed that 21% had ARBD; most of whom were male and in their early 50s.

While studies have looked at different approaches to treatment, emphasising the need for a holistic approach to address the multiple difficulties individuals may experience (including mental health and memory), research on lived experience perspectives is limited. A 2019 rapid review only found nine research papers that addressed the perspective of those with ARBD, their relatives/carers, and health or social care staff, and/or the support offered to those with the condition.

Support for people living with ARBD

People who lack capacity may struggle to make decisions about their own welfare. This can include where they should live, if they need extra support, if there are things that need to be restricted to keep them safe, and care and treatment they may need to keep well. The rights of people who lack capacity are enshrined in the Adults with Incapacity (Scotland) Act 2000 (the AWI Act) which also sets out the role and responsibilities of a welfare guardian, who can make decisions about where a person lives, as well as about their personal and medical care. The welfare guardian of a person can either be an individual (a family member, partner, relative or a friend) or a local authority.

People with ARBD are just one of many groups of people who sometimes need a guardianship. In 2020, there were a total of 553 people in Scotland who were both subject to a welfare guardianship order and had a diagnosis of ARBD. At the Mental Welfare Commission, we visit a number of people who are subject to a welfare guardianship order each year to look at whether the principles of the AWI Act (benefit, least-restrictive option, wishes of the person, consultation, and support people’s existing skills as well as develop new ones) are upheld.

Earlier in 2021, we visited 50 people with ARBD (and a guardianship order in place) across local authorities in Scotland with the aim of better understanding how their rights were being upheld. One of the important things we found when visiting, either in person or virtually as a result of Covid-19, was that many may not be living in appropriate places.

People with ARBD are often younger than the average age of a care home resident and for those who were 65 years or younger we found them often to be living in community care homes with residents much older than themselves. This can create dependency and isolation. We believe that these living arrangements, with guardianship orders, compel people to live in a setting they would not choose themselves, and those commissioning these types of services must consider whether this breaches a person’s human rights.

We expected to see further development of specialist, innovative approaches and bespoke services in Scotland to meet the needs of people with a diagnosis of ARBD; like anyone else, people with an ARBD diagnosis are entitled to care provision which reflects their age and individual interests.

The importance of care that benefits and empowers people with ARBD

Despite having concerns about the place in which some people were living, and how this adhered to the principles of the AWI Act, we also found a lot of good practice. We spoke to relatives or carers of people with ARBD who were positive about the care and support their loved ones were receiving:

He has never been better looked after and he now has a quality of life he has never had as his sole priority used to be drinking.

Since the order was granted and he has stopped drinking alcohol I have seen a huge improvement in his ability to look after himself.

In addition to positive experiences of the support available, some relatives told us about the devastating and long-lasting effects their loved one’s diagnosis had on the entire family. This was particularly the case when the misuse of alcohol was seen as a personal choice, rather than an illness, by professionals. In one of the visits we noted:

Family relationships were strained, the family had tried to get support from the GP however had been advised that it was their relative’s choice to consume alcohol.

We were disappointed to hear about these experiences, especially since the Expert Group on Alcohol Related Brain Damage called for increased public and professional awareness in their report A Fuller Life back in 2004.

In our report, we made four recommendations for health and social care partnerships. The first asks that they commission suitable, age appropriate, and where possible, specialist alcohol-related brain damage services.

We also recommend that the critical role of a delegated officer in a local authority must be held by a named person who maintains regular contact with the individual subject to the restrictions of the guardianship order. A delegated officer is a person with delegated responsibilities from the Chief Social Work Officer whose role it is to monitor the welfare of the person, be contactable by third parties, ensure a care plan is delivered, hold regular review meetings and use powers in the guardianship to promote the person’s personal welfare.

Our third recommendation is multidisciplinary reviews for people with ARBD, which should be a dynamic, coordinated process informed by the principles of the law, maximising both the contribution of the person and their relatives/carers where appropriate.

The final recommendation relates to advocacy support, an important safeguard to ensure respect for the rights, will and preferences of the person and not what is considered by others to be in that person’s best interests.

Continued focus on substance use and mental health

Our work on ARBD has been shared across services and we will follow through our recommendations, looking for changes from the services, and hoping services will learn from the good practice and improved outcomes for people that we highlight. This is a vulnerable group of people who are often judged and stigmatised - we must not lose sight of their right to appropriate care and treatment.

With the continued high number of alcohol- and drug-related deaths in Scotland there is still more to be done and we continue to meet with people receiving and providing care, treatment and support from mental health services. Next year we will report on two ongoing visiting projects which includes some focus on substance use; one looking at mental health care and treatment in prison and one focusing on people with dual diagnosis of mental ill health and problematic substance use. We hope that our visits will help us get a better understanding of access to services and in the long run ensure that people are able to get the support they need.

Read the report, Care and treatment for people with alcohol related brain damage in Scotland: 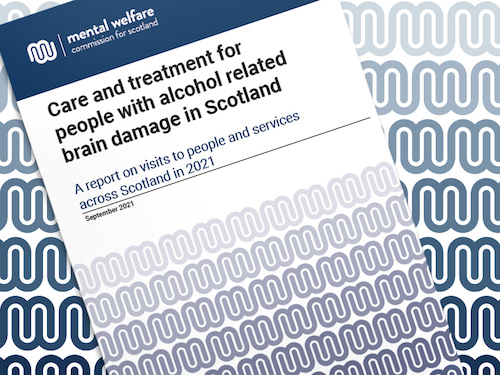