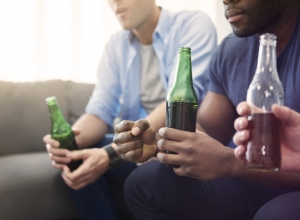 By Colin Shevills, Ex-Director of Balance, the North East of England’s alcohol office.

Men continue to drink more and consequently face more alcohol-related harms than women. In this blog post, Colin Shevills discusses men and alcohol, covering male identity, sport, and positive signs that young men are turning away from alcohol. Colin discusses public health responses that will make it easier for men – and indeed for everyone – to make healthier decisions every day.

I had been the director of Balance, the North East of England’s alcohol office, 10 years before anyone had asked me to get involved in an event designed specifically to consider men’s drinking. I thought little of it at the time but, on reflection, it is quite extraordinary.

It’s not like men and alcohol as a specific topic had been at the forefront of Balance’s work. We were known for our mass media campaigns highlighting the link between alcohol and cancer. For pushing for minimum unit price in England. For focusing on the impact of alcohol advertising, especially on children. But not for the relationship men have with alcohol.

Yet, the statistics are clear. Figures from Balance’s yet-to-be published annual public opinion survey indicate that men in the North East of England are almost twice as likely to drink at risky levels than women. They are also twice as likely to binge drink on a weekly basis, despite what some of the more salacious media stories and images might lead us to think. And, according to NHS Digital, two-thirds of alcohol related hospital admissions in England are for men and over twice as many men die from an alcohol specific cause. A similar story is seen in Scotland, with hazardous or harmful drinking levels being twice as high for men as women, and men being more than twice as likely as women to be admitted to hospital for an alcohol-related condition.

For these reasons I knew reducing male consumption was important if we were to reduce harm. We knew our campaigns had to reach men. But we also knew that women are often the gatekeepers of family health so we spent as much time talking about women as we did about men.

It wasn’t until I chaired the opening seminar in SHAAP and the Institute of Alcohol Studies (IAS)’s series about Men and Alcohol that I began to reflect more deeply about the issue. The meeting focused on the role alcohol plays in male identity and the words of the three excellent speakers resonated deeply.

Like them, I grew up in a working class community: in my case in the pit villages of County Durham. We were coming to an era of change, but it didn’t feel like it at the time. My father worked at the pit because his father worked at the pit. In fact, he literally inherited his father’s tools at the age of 13 when my grandfather was killed in a mining accident. He needed to provide for his mother and younger sisters – he had no choice.

He expected his oldest son – my brother – to do the same. It was a well-paid and secure job and the obvious choice. Fortunately things changed when I reached working age, at least as far as my employment prospects were concerned. But when it came to drinking, much stayed the same.

For my father’s generation you worked hard, you played hard and you looked after your mates – both at work and at play. At work being a reliable member of a team was literally a matter of life and death – and that attitude played out in your social life. You were expected to meet up with your mates; to stand your round; and not be the first to say you’d had enough.

Drinking and friendship went together. They were key to male identity in the pit villages of the North – and in many other industrial working class areas. They remain so to this day, despite the fact that the mines – and huge swathes of heavy industry and the skilled jobs that went with them – have gone.

Of course, the alcohol industry is as aware of these connections as we are. That’s why their marketing to men focuses so closely on friendship and belonging. On being part of a group. On looking after your mates. On humour. On masculinity – and how alcohol can turn you from a ‘zero’ to a ‘hero’.

As highlighted in the second seminar in the ‘Alcohol and Men’ series, our obsession with sport has not been neglected by the alcohol industry. Through advertising, marketing and sponsorship the alcohol industry has made it seem like booze and sport - and football in particular - go together, at least for men.

Alcohol and sport has long been linked. I can recall being taken to the pub on a Saturday lunchtime by my older brother before attending the match – and that was long before I should have been allowed through the door.

But Big Alcohol has brilliantly appropriated that relationship. And it became supercharged with the advent of the Premier League and Sky Sports televising live football games. It meant you didn’t have to leave the pub on a Sunday to watch the action from three top games. Far from elite sport providing a healthy example to young boys and men, it was cementing the norms around men and drinking.

And yet, something does appear to be happening with male drinking. It has become apparent from a range of data that some young men are turning away from drinking. The most recent data on children’s drinking via the Smoking, Drinking and Drugs survey showed a fall in drinking amongst 11-15-year-old boys in the North East. Unpublished public opinion data from surveys carried out in the region by Balance suggest that 18-24 year olds are as likely to abstain as they are to be risky drinkers. This is in stark contrast to older male generations where consumption appears to be on the increase.

It’s positive news, but we urgently need to understand why the change is happening, because you can be sure the alcohol industry will be looking at ways to reverse the trend. They will want to understand the motivations of young men so that they can re-connect them emotionally with their brands and products.

Perhaps they are already doing so with the development of the alcoholic seltzers category that is being positioned as supporting a healthier lifestyle, despite the fact that, in alcohol, it contains a Group 1 carcinogen, typically at levels equivalent to most beers and ciders. It seems they are also getting young people to emotionally re-engage with their brands with the explosion in low and no alcohol products.

Having worked in the commercial marketing sector I can only assume that their strategy is to move young abstainers into occasional users of their products before moving them up the value chain to becoming regular customers – with all of the dangers to health that journey entails.

So how should public health respond? Well we should begin by welcoming the change in young people and try to find ways of sustaining and spreading young men’s changing relationship with alcohol.

We can start with parents – by making it clear that a drinking career is not inevitable for their children. At Balance focus groups with parents indicated that, because of their own experiences, many believed it was inevitable their children would drink. To be a responsible parent and to keep them safe, they needed to teach their child to drink ‘safely’. We need to educate parents and help them understand the power of both their words and actions.

As was highlighted in later seminars in the ‘Men and Alcohol’ series, we need to talk positively about the changes happening and highlight the phenomenal success of Dry January and the ‘sober-curious’ trend. By doing so we sell the benefits of healthy choices and reinforce, validate and encourage people’s choices to abstain from alcohol - or at least to drink within the low risk guidelines.

But that will not be enough. We need to make it easier for men – indeed for everyone – to make healthier decisions every day. That means changing the environment in which those decisions are made. It means changing the policy and regulatory environment, not least in order to disrupt the alcohol industry’s attempts to re-engage young people with their products.

It should start with a huge public health response to the Government consultation on labelling as, without information on product labels – including health warnings – it is more difficult to support and encourage the healthy choices many young people are taking.

It should involve finding ways to ensure positive new developments such as no and low alcohol products being used to support healthier lifestyles and not just as a gateway to alcohol brands.

And, as always, it means health advocates getting behind the battle to tackle alcohol’s affordability, both by persuading the Government to introduce minimum unit price in England – and by calling for a fairer, simpler and healthier duty system, one which supports a public health led recovery from the pandemic.

SHAAP have partnered with Men's Health Forum Scotland during Men's Health Week (14-20 June) to highlight the high rates of problem drinking in men in Scotland, and the consequently high health burden relating to alcohol. We have produced infographics based on the latest data for Scotland and provide further resources. Read our news item to learn more, which includes Men's Health Forum's CAN DO Challenge.

Read the SHAAP/IAS Men and Alcohol: Key Issues report, which summarises the contributions and key findings from the SHAAP and IAS 2019/20 'Men and Alcohol' seminar series and presents recommendations for research, policy and practice (the launch of this report featured in The Scotsman).