Scotland has made progress in reducing harm from alcohol and an important part of that approach has been attention to regulating the price, availability and marketing of alcohol, known as the World Health Organization's ‘Best Buys’. However, the Scottish off-trade alcohol market remains lightly regulated in comparison to many countries. Here, Robin Room discusses international examples of alcohol monopolies.

What is an alcohol monopoly? There are many variations

There are many versions of government alcohol monopolies around the world. It’s a good idea to look at the experience in different places with different models. The monopoly can be on all alcoholic beverages, or just on some of them. It can be at any or all of: the production level, the wholesale and importation level, or the retail level. Within the retail level, it can be of on-premise consumption (taverns, etc.) or purchase for off-site consumption (liquor stores, etc.). It is also possible to have a system which is partly government-run and partly private enterprise.

Before about 1850, when governments monopolised all or part of alcohol sales, the motive was primarily as a source of revenue. Alcoholic beverages were an attractive product which people would buy at prices considerably above the cost of production and distribution. In those days before income and general sales taxes, profits from it could be a considerable part of government revenue.

In the late 19th-century temperance era, as attention increased to the harms to the drinker and to others from alcohol, government monopolisation of the market became established as an alternative strategy to reduce the harms, instead of prohibition. Staffed by government employees whose paycheck did not depend on how much was sold (“disinterested management”), government monopolies with a primary goal of limiting the harm from alcohol became established and proved themselves in a number of countries. Typically, retail alcohol monopolies have fewer outlets than in a privatised system, and are not open late at night – both factors which keep down the rates of harms from drinking. The staff of a government monopoly store have a regular job paid at civil service rates, and are not under pressure to serve those who are under-age or already intoxicated, or to encourage customers to “drink up” and order more. The government typically gets more revenue from a monopoly than from taxes on a private system, but this doesn’t mean the retail prices are necessarily higher, since the private profits in a private system are gone, and the multiple outlets and long opening hours are reduced. Indeed, when government alcohol monopoly systems have been privatised in north America, people have commonly assumed that the retail prices will drop, but the repeated experience, against those assumptions, has been that they actually go up.

The first alcohol monopolies set up with a public health and welfare goal were on-premise taverns owned and run by the local government in Sweden, in what became known as the “Gothenburg system”. In Britain, the equivalent was known as the “Carlisle scheme”, although it was not limited to Carlisle – two of the districts were in Scotland: Gretna and Cromarty Firth. The scheme was set up during World War I and operated under central government control until privatisation in 1971.

Such local government-run taverns still exist today, in Minnesota and a couple of other US states, and in some areas in Australia and New Zealand. In some places, they have lost their monopoly status, where privately owned taverns are now also allowed – although this tends to undercut the financial and public health benefits of a monopoly.

But monopolies on off-premise retail sales are more common and widespread. About one-third of US states and all Canadian provinces except Alberta have a retail alcohol monopoly, and all Nordic countries except Denmark. The monopolies vary in their coverage of alcoholic beverages, though distilled spirits are always monopolised. For instance, beer is not monopolised in any US state, and lower-alcohol beer is not in Sweden or Finland; and US monopoly states vary in whether wine is monopolised. It is quite common for exceptions to the monopolisation to be made for local products: “farm-gate” shops for berry wines, in Finland, for instance, and thus perhaps for locally-distilled whisky in Scotland. But experience suggests it is important that these exceptions be limited and clearly specified; otherwise, there is sure to be recurrent pressure from private interests to expand the scope of the exception.

In the neoliberal decades of the late 20th century, the idea of a government monopoly was increasingly attacked, and in some places monopolies were privatised, and in others substantial private competition was allowed. Ironically, these privatisations have allowed the growth of a substantial research literature showing the advantages for public health and welfare of a government alcohol monopoly.

The types of monopolies described so far are all at the retail level. But government monopoly also existed in some of the places I have mentioned at the wholesale, import and production levels. As part of joining the European Union, Finland and Sweden privatised their monopolies at these levels, but managed to keep their retail monopolies. The two countries spent considerable energy demonstrating to EU visiting delegations that there was no discrimination against non-Swedish (and for that matter, non-EU) products in what was stocked and sold. I remember being proudly shown the Brazilian wine on sale in a Finnish monopoly store north of the Arctic Circle. 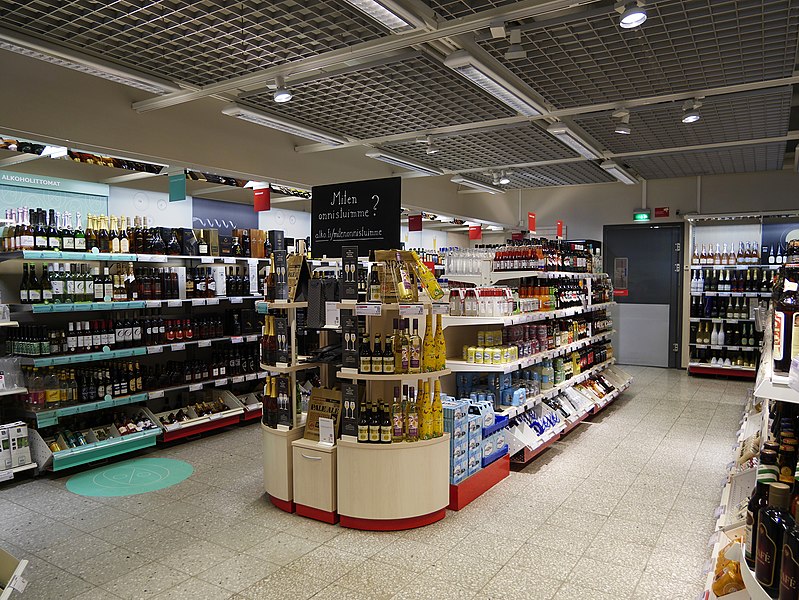 A photo from inside the Alko store in Lappajärvi, Finland.

Experience with the North American and Nordic systems suggests that monopolisation at the wholesale level also should be considered. That the provincial wholesale monopolies in Canada, for instance, are established under federal law there has served as strong protection for the retail-level monopolies. In the US, the state monopolies are offered some protection by the “Des Moines agreement”, which provides that they will get the lowest price that a wholesaler charges anyone for a particular product. Experience suggests that monopolisation of the wholesale level or some other kind of legal protection of wholesale supply and price is needed to protect the retail level from attack by transnational producers and suppliers, and to ensure that the government benefits financially more from a monopoly than from a privatised system.

So there is a now a substantial literature showing the advantages of an alcohol monopoly for public health and welfare, including a review by a US federal government agency that concluded that alcohol monopolisation reduced rates of drinking-related harms, and that “there is strong evidence that privatization of retail alcohol sales leads to increases in excessive alcohol consumption”.

Where public opinion on the state’s monopolisation of alcohol has been tested, it is often found to have substantial public support. For instance, popular support for the alcohol monopolies has increased in the new millennium (also see p. 27 of this report). Two years after the monopoly was privatised by a referendum in the US state of Washington, many of those who voted for it had changed their opinion, so that a majority were now in favour of restoring a state monopoly.

There are thus substantial advantages of a retail monopoly system for public health and welfare. The advantages are generally greater when the monopoly is more complete than when some alcoholic beverages are excluded, or some private stores are allowed. A monopoly system is also potentially a source of substantial revenue for the government – more revenue than from equivalent sales in a private system. But experience suggests that an important consideration is which government department or agency has overall responsibility for the monopoly: revenue tends to become the most important consideration if the monopoly’s management is placed under the jurisdiction of a treasury or finance department. To prioritise public health purposes, it is better to place it under the jurisdiction of a department responsible for health or welfare. 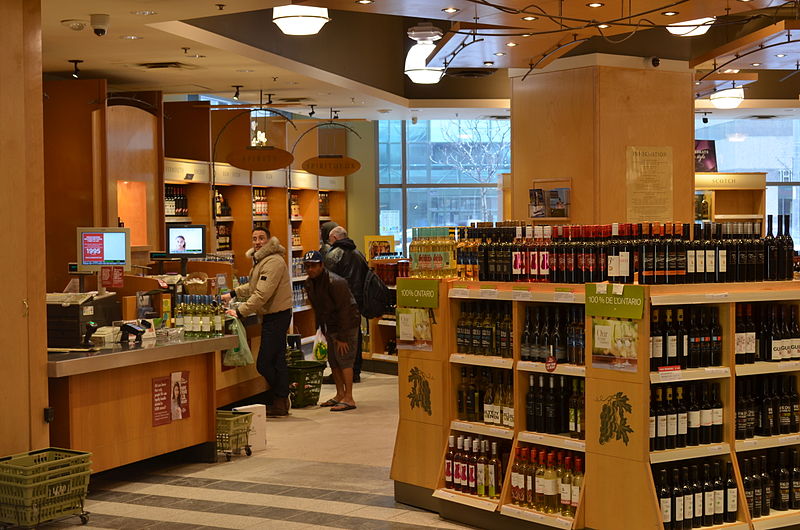 A photo from inside the LCBO store in Toronto, Canada.