Residential rehabilitation: powering up in 2021 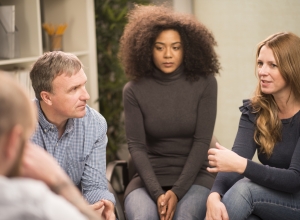 “Rehab? What’s the point of it? There’s no evidence that it works. I don’t refer anyone to rehab. Do you?”

The addiction worker was talking to a colleague – another practitioner working in the field. What he didn’t know was that his workmate was in long term recovery from addiction and felt he owed his recovery, at least in part, to his three months in rehab several years before.

When I heard this, my initial response was a tight smile at the irony of the situation. But as the clinical lead of an NHS residential rehabilitation service (LEAP), I also felt frustration at our colleague’s contempt for the option of rehab as a treatment intervention. In practice, his own beliefs would be a barrier to his clients accessing rehab. Our own attitudes can profoundly affect those we have pledged to help.

Lack of access to residential rehabilitation, high levels of drug and alcohol deaths and harms, and worries about treatment more generally have led to a surge in advocacy from those with lived experience of addiction and recovery. They feel let down by treatment services, have found their voices, and are raising concerns and demanding change. Their voices are now being heard.

On 14 January 2021, Angela Constance, Minister for Drugs Policy in the Scottish Government, said, ‘I believe in the power of residential rehabilitation’ and committed to bringing access to rehab up to the level of the European average where provision is much greater.

At the end of the summer of 2020, the Public Health Minister at the time, Joe FitzPatrick, set up a Residential Rehabilitation Working Group to explore the issue of residential rehab in Scotland. I was asked to chair the group. The government’s position was that if we wanted to tackle alcohol/drug deaths and reduce harms, we needed all the effective treatment tools we could identify at our disposal. When it came to accessing rehab, there was evidence of a postcode lottery. The Scottish Government felt that if rehab was the right option for someone’s recovery, then they should have access to it.

With support from the Scottish Government, we explored the evidence base and developed a mapping tool which we used to survey the field. We supplemented the data we’d gathered by using Alcohol and Drug Partnership (ADP) annual reports and produced a mapping report. Finally, the group made recommendations to the Minister, which were published in December 2020. Although we await a formal response, the initial feedback was positive.

What is residential rehabilitation?

Residential and quasi-residential rehabilitation programmes aim to support individuals to attain an alcohol and drug-free lifestyle and be re-integrated into society. Programmes provide safe accommodation and intensive psychosocial support with a structured programme of daily activities which residents are required to attend over a fixed period of time. There are various models of delivery.

Who is it for?

Existing guidance and research suggest that residential rehab is best suited to those with the most complex needs and those who have not previously benefited from previous community-based psychosocial treatment. It should be considered for those seeking abstinence and who have significant comorbid physical, mental health or social (e.g., housing) problems. Consideration should also be given to those with low drug/alcohol problem severity, but high-risk factors paired with low recovery capital (i.e., the total resources a person has available for recovery).

In our service, around 70% of patients identify alcohol as their primary problem substance, but more than 60% have polysubstance problems. Most have trauma histories and mental health diagnoses. A significant number have chronic physical health issues. The majority are high users of unscheduled care services. None have reached their goals in community services. They need intensive treatment of adequate duration with robust aftercare and connections to ongoing support once treatment is complete.

Is there any evidence that it works?

Yes there is, but we need more. A review of the evidence published by Sheffield Hallam University in 2017 found: ‘There is a strong and consistent evidence base supportive of the benefits of residential treatment that derives both from treatment outcome studies and randomised trials. Although more expensive, there is evidence that the initial costs of residential treatment are to a large extent offset by reductions in subsequent healthcare and criminal justice costs.’

A review of recent rehab outcome research in 2019 identified 23 studies of which 8 were rated as methodologically strong. This review found evidence of efficacy across a range of outcomes. One of these was the LEAP outcome study which had a one-year follow up. We now have data to 5 years (unpublished) which shows our patients have high problem severity, but also confirms good long-term outcomes across a wide range of domains. There is more detail on the wider evidence base for rehab here. What’s clear is that we need more research – as has been called for repeatedly over the last 15 years. Academics are not flocking to the cause.

What is the state of play of rehab in Scotland?

There were a few surprises and a fair bit of confirmation of what the Residential Working Group had anticipated. After reading reports over the last two or three years in the media about the perceived attrition of residential rehabilitation beds, I was surprised that the 18 treatment centres we identified had 365 beds between them.

Consider a Scottish Government survey from 2004, which found 21 centres and 329 beds. Admittedly, it’s difficult to make direct comparisons as the criteria we applied to identify services were different to those in 2004, but it’s an interesting finding, nonetheless. There’s more: around 100 of those beds are taken up by people normally resident outside Scotland.

Of the organisations completing our survey, the majority were voluntary or not-for-profit organisations (77%). Private providers accounted for 15%, and only 8% (one facility) were in the statutory sector (as it turns out, the one I work in).

But the number of beds and type of provider don’t tell us much– how easy is it to access those beds, who pays for them and how do we compare to our neighbours in terms of provision?

Extrapolating from the data we had gathered, we estimated that in 2019-20, a total of around 1340 individuals started a residential rehabilitation placement across all 18 facilities identified, with around 830 of these individuals estimated to have been resident in Scotland prior to their placement.

Residential rehabilitation episodes in Scotland are estimated to make up fewer than 5% of all alcohol and drug treatment episodes. We are marginally better than England (3%), but much worse than the average in Europe (11%). It is (at least) the European level of provision that both the First Minister and the Drugs Policy Minister have set as our target for Scotland. This means significant changes for the better lie ahead.

Capacity is an issue, but we could treble capacity and still have access problems. We found that getting to rehab is difficult for many and impossible for some, depending on your postcode and whether or not your keyworker is positively disposed towards the intervention. Pathways are not always clear, costs vary greatly, funding, where it exists, is a bit of a hotchpotch and there’s little standardisation. Then there’s the problem that services are just not joined up. Often those that get to rehab are there only because they have had a tenacious worker, family member or advocate by their side.

Here’s another surprise: we found that ADPs only funded 13% of those accessing beds. Around a quarter were funded through benefits or charitable sources. Well over half were self-funded or covered by private health insurance, suggesting that if you are not well off, you have less chance of getting to rehab. Those with the greatest needs and lowest resources have the fewest choices it would seem.

Thinking back to the addiction worker who ‘never’ referred to rehab: there can be tenfold differences in referral rates to rehab between areas, teams and even between individuals within teams. That’s unacceptable. Your chance of getting a referral should clearly not be influenced by how your ADP, worker, nurse, psychologist, OT or doctor feels about rehab.

What needs to change?

Given that our alcohol and drug strategy, Rights, Respect and Recovery, is founded on the concept of human rights and that there is evidence of inequality of access to rehab, we have a lot of work to do. There is now an appetite to get it done - the Scottish Government has given our recommendations an initial thumbs up – and the First Minister has just announced a significant and welcome investment of £20 million per year over the next five years to increase rehab provision. This will have a major impact. How we do the work is yet to be determined.

At the heart of this are some simple principles - access to rehab should be even and fair across Scotland, ADPs should ensure rehab pathways are in place and funding should be readily available. We need to get a better handle on the diversity of pathways, referral criteria, funding models, capacity, demand, value for money, whether standards would be helpful and understand better the various models of delivery.

We need research to develop the evidence base and this needs to be resourced and commissioned, though rehabs also need to play their part in gathering and publishing data. It has always struck me as odd in a nation that puts hundreds of people through rehab every year, that we know so little about what happens to them over time. We should start to record outcomes specifically tied to rehab episodes using DAISy, the waiting times and outcome tool launching this year.

Finally, we need to ask – could rehab help reduce the deaths and other harms associated with alcohol and drug use in Scotland? I believe it already does, but this needs some serious consideration in 2021.

A subgroup of the Residential Rehab Working Group is developing a good practice guide and we will be doing some consultation with stakeholders on the way forward in 2021. Rehab is only one tool in the toolbox, not the answer to all of our challenges, but up until now it has been at the bottom of the pile, somewhat neglected.

I’d like to see real effort going into making Recovery-oriented systems of care an operational reality in Scotland, where we have a wide menu of treatment options, including rehab, with everything joined up. The focus should be on the person with the substance use disorder (and their family) with a holistic, confluent system helping individuals to reach their goals.

Nicola Sturgeon has set the bar high. In her speech to parliament on 20 January 2021, she said, ‘the aim is to ensure that residential rehab is available to everyone who wants it - and for whom it is deemed clinically appropriate - at the time they ask for it, in every part of the country.’

Based on this, I’m confident, going forward, that residential rehabilitation will be powering up in 2021. This is thanks not only to the commitment of government and the work of our group, but also to those with lived experience, recovery advocates and professionals. In fact everyone who supports choice and believes in the potential of those suffering with substance use disorders to recover.

I hope this means rehab will not only be the preserve of the wealthy, but available to all who need it.

Dr David McCartney is an addiction medicine specialist, the Clinical Lead of LEAP (NHS Lothian) and the Chair of the Scottish Government’s Residential Rehabilitation Working Group. He blogs on Recovery Review. Follow him on Twitter @DocDavidM